VII. South Bohemia Classic is past. Next year knows its date already 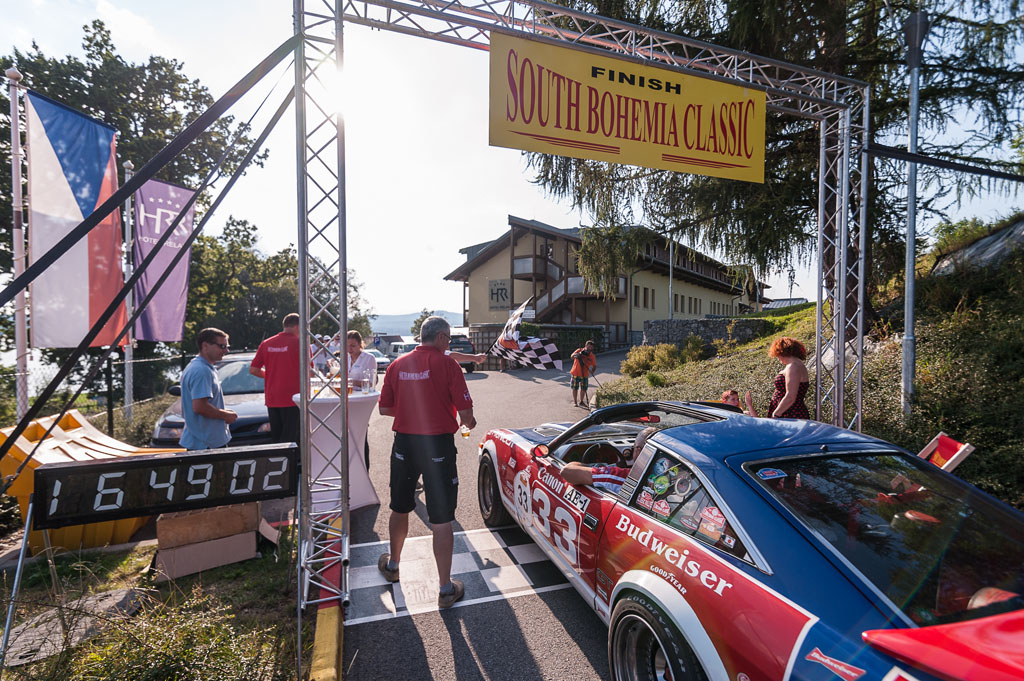 During the second weekend in September the sunlit landscape of southern Bohemia and Austrian and German borderlands hosted the seventh year of hundredth rally for classic and sports cars. In total, 103 crews in the Classic and Exclusive categories departed from the ceremonial start of South Bohemia Classic at the Přemysl Otakar II. Square in České Budějovice towards the track laden with crowds of spectators.

The absolute winner of the contest that offered fourteen diverse tests of accuracy, is married couple Renata and Jiří Vítek of Liberec with the car MGA 1500 Roadster from 1958, who during both days collected a mere 345 penalty points, a fifty-three less than the defenders of last year´s first place and winners of the mechanical stopwatch category Albert Pance and Anna Ruthová (Jaguar E-Type, 1962). Bronze medal went to another family duo Patrik and Jan Skála (Austin Healey 3000 Mk III), whose point score stopped on the value of the 476 on Saturday afternoon.

The secondary Exclusive category for modern sports cars was dominated by Miloš Kašpar and Marie Janak, whose Austin Mini 1275 GT engine broke down just before the competition so they had to be satisfied in participating with a Škoda Octavia RS. And they managed it fine as they only received 393 penalty points. Silver position between modern-day specials won the crew of Mazda MX-5 consisting of Michal Kolman and Radovan Jezdinský, the third place was captured by married couple Jana and Daniel Pavlíček (Honda NSX) with only four points loss.

Iva Mužíková with Jana Sigmundová (Audi R8 Spyder) dominated the Ladies’ Cup in South Bohemia and the Family Cup was dominated by the racer with experience in “big” rally Jindřich Kunc in Fiat 124 Spider this time navigated by Jan Pícha junior, son of his former navigator.

VII. South Bohemia Classic was together with the July competition in Karlovy Vary part of the Classic Rallye Trophy 2016. The overal winners were Mr and Mrs Vítek.

While this year’s South Bohemia Classic ended only a month ago, ČK motorsport, as the organizers of the competition, has already decided to publish the dates for next year due to the high demand for accommodation capacities. So write down in your diaries that VIII. South Bohemia Classic will be held on 8 and 9 September 2017.

The competition´s centre remains at the Hotel Resort RELAX in Dolní Vltavice which will enlarge its capacity over the winter thanks to the construction of apartment houses . Applications for VIII. South Bohemia Classic 2017 will be available from 1 December on the website www.southbohemiaclassic.cz.